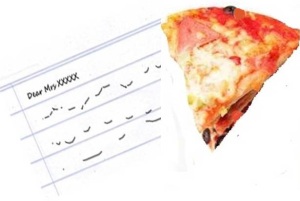 I was talking to a friend of mine the other night at a Winter Guard Event. She was relating a story about how she had written a note to her daughter’s staff listing the items – the only items, her daughter was allowed to purchase that day. Her daughter added an item to that note and handed it in hoping no one would notice the addition.

Of course she was caught because the handwriting did not match, but my first reaction to the story was “That is SO Cool!”. Another friend agreed that it was fantastic. My friend laughed and of course knew that it was really an accomplishment, but you know…..she had to be the mother. She had to at least pretend to be mortified.

Much like when DC stacks 3 slices of pizza on top of each other thinking I will actually believe that he has only one piece -I have to be impressed. He thought it out and came up with that scam by himself – but on the other hand, I have to be the mother and tell him that it is wrong to be so sneaky and to lie.

I told her that if DC tried something like that, it would definitely be a blog post and even though it was not DC this time, a post it is.

This conversation reminded me of an old web-site my friends and I used to run, many years ago – probably 15 years ago when our children were young. One section of the site was titled:

The milestones WE Celebrate –

Some might find our celebrations odd, but they are ours. We celebrate every advancement and every achievement, even if the achievement is something that most parents would frown upon – we do not. To us – it is progress.

Some of the following blurbs are mine (DC was very young at the time) and some are from friends of mine, but they were all very important achievements for us at the time.

So…. here are some of The Milestones WE Celebrated many years ago:

Your son whacks his Little League Coach in the head with a bat.  Both you and the Coach are thrilled because this was the first time he attempted to swing at ANYTHING!

You attend your Parent/Teacher conference: Your son’s teacher jubilantly announces that your son and his friend were cheating from each other’s papers. You are as thrilled as she is, because this means he finally realized (on his own) he was supposed to be doing something other than just sitting there – and also figured out, ON HIS OWN, how and where to find out just what it is he was supposed to be doing.

It was a “bittersweet” morning when I discovered that almost all my “sled” ornaments from the Christmas tree had been crushed on the floor.  We were surprised to discover that my son was the culprit. While we watched,  he carefully removed a sled, (which are many),..gingerly placed it on the floor and then ever so slowly sat on it! I was dismayed that our collection was reduced to only the few left “on higher ground” but thrilled he finally realized what a sled is for!!

My son began saying “shut up” all of a sudden and quite often. I realized that he picked it up from Princess Diaries. I knew he had no idea what it really meant, but still, he continued to say it.
Last night he was in the car with one of his friends. His friend generally starts talking as soon as he gets in the car and the blue streak continues during the entire ride. On this particular ride my son turned to him and said “Shut Up”.
His friend’s mother called me on the phone immediately, very excited because she knew that it meant my son actually figured out what the word meant.

My son loves bread, more than just about any food. A few days ago, a friend of mine baked bread for Christmas gifts. She delivered two loaves to our house, one Cinnamon and the other was a small ‘personal size’ loaf of plain bread. We immediately had to make toast when he saw the Cinnamon bread.  Later, when he was giving me his breakfast order (which he does every night before bed), he requested the “Elf Bread”. Not really understanding what he meant, he went to the counter to show me the little ‘personal size’ loaf of bread – “Elf Bread!”

The forging of notes and the stacking of pizza would certainly have a place in the top 10 if we were ever to compile a new, updated list……