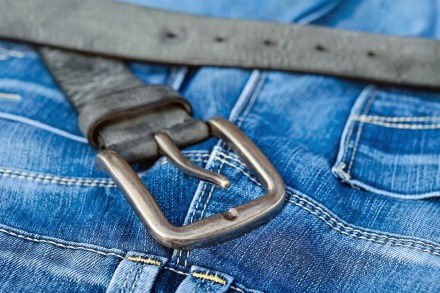 I saw a post a while back from my friend over at Our Adventures with Riley  (the actual post can be found below) and thought what a great idea this would have been back when DC had such huge issues with wearing a belt. Not only did he just not like wearing them but he had a hard time buckling and unbuckling them.

Then there was the placement of the holes. They were never quite right, so years ago we moved on to cloth/canvas belts. Those seemed to work a bit better. No pesky holes to deal with.

He went a good long time using the cloth belts with no issues.

Then one day, he could not figure out how to put one on. He was trying to start from the side pants loop which meant when he was finished the buckle would be on his side instead of in front.

I don’t know what caused this confusion, but it continued. Every day he came and stood in front of me so I could see if he was starting his belt correctly. Sometimes he did and other times, not.

Along with the new processing issue of putting on the belt, he seemed overly obsessed with the belt being as tight as possible, which again was never an issue.

Because there were no holes and a D-ring instead of a buckle, they were loosening up after a few minutes and we now had the constant, all day adjustment of his belt – over and over again.

Soooo, we went back to the buckle belts. I found a few that had holes everywhere so it didn’t matter which hole he used.  He could wear it as tight or as loose as he wanted. He wasn’t limited by the placement of the holes.

Now that we had all of that squared away, he seemed fine and no longer had any issues with his belts. He was happy with his belts for so long of a while that when I saw the belt post from Riley’s page I did not think anything of it, other than it would have come in handy way back when we were having belt issues.

Speak too soon, much?

Recently he developed another issue.

The excess after his belt was buckled, HAD to either go only as far as the next belt loop or it had to reach the second belt loop. There was no in between. If it went out past the first loop he would pull his belt tighter and tighter until it reached the next loop.

And again, there was the constant, all day long adjustment of the belt. It got to the point that the adjustment of his belt was holding him up during every portion of his day.

I tried cutting a few so the excess was just long enough to reach the first belt loop, but I had to be precise in my measurements and some belts just can’t be cut.

I remembered and I went back and searched for Riley’s belt post and ordered a few.

It took a while to get the belt on him and it will take a while for him to be able to put them on himself because they are  different.  But I was more worried about the reaction of WEARING something different than I was in him learning to put it on.

When I got the belt adjusted and on, DC’s first word was “Amazing!”

He didn’t take it off and wore it the rest of the day.

We are still working on him learning to put it on himself so at this moment in time, he alternates between the new “Buckle-less Belt” and the one that I was able to cut exactly to reach the first belt loop.

© Take Another Step and Taking a Step at a Time - Autism, 2013 - Present. Unauthorized use and/or duplication of this material without express and written permission from this blog’s author and/or owner is strictly prohibited. Excerpts and links may be used, provided that full and clear credit is given to Vickie C. and Taking It a Step at a Time - Autism with appropriate and specific direction to the original content.

DC and BB Do Christmas in EUReKA

Just a little bit of ‘cross-posting’ for the Holiday Season from our EUReKA podcast. DC and his best friend BB co-host the two EUReKA Christmas Episodes. DC has co-hosted a few times with me in earlier seasons. It was difficult for him. I normally had to play the episode silently for him and ask […]

Thanksgiving weekend is usually DC’s big step into the Christmas Season. We normally go away for Thanksgiving and the weekend after. Once Thanksgiving Day is officially over, Friday and Saturday are usually all about Christmas. There are a few standard stops that we make each year, one being the Santa Express or the North Pole […]

DC has his list for Santa posted on the refrigerator: Bandaids 18 Markers White Paper A Christmas Story Live DVD Dolls We are away for the Thanksgiving weekend. As always, on the day after Thanksgiving, we visit his favorite shops in the area. In one shop, DC asked to buy markers. We have been trying […]

The Many Meanings of “Sorry”

I wrote the post below six years ago. If I were keeping track, I would have to imagine that “Sorry” would most certainly show up in the top 5 on the list of DC’s most used words. Some of the time, he IS sorry for something or another, but as I have said and written […]

Belts…. They Worked Until They Didn’t

I saw a post a while back from my friend over at Our Adventures with Riley  (the actual post can be found below) and thought what a great idea this would have been back when DC had such huge issues with wearing a belt. Not only did he just not like wearing them but he […]

Happy Halloween – Sing it with me… “It’s Raining Again”

DC does not like the rain. He just does not. When he was younger, it was just the rain he did not like but now, in his mind – rain leads to storms so there is no tolerating the rain at all any more. I remember taking him to a birthday party when he […]