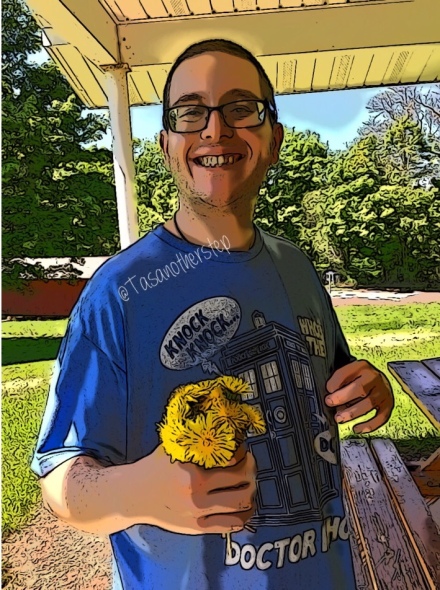 I know I have said in one post or another that there is always progress. Maybe not the progress he made when he was younger, but there is always something. It may be just a little thing but it is always cause for celebration.

Yesterday, DC attended his Camp Spring Picnic. He loves camp – you have heard that before if you have been around here long enough. Even though this is something he WANTS to do and even though he was so excited about it that I had to hear about it every hour it seemed, all week – there is still that “Arrival Anxiety” when he first arrives.

He did not skip that step yesterday.

You may have also read about DC’s phone skills or lack there of at times. DC can use the phone. He will call anyone THAT HE IS TOLD TO. He calls me every day when he is leaving his program (because he is supposed to) and the conversation rarely veers from the script he uses.

He will not use the phone spontaneously. This is something I really want him to understand. I want him to think to call me if something is wrong or if he happens to get lost or for any reason at all. I want it to occur to him if something goes wrong, that he should use his phone. I really am not sure that it would occur to him. I’ve gone over this many times, but as many times as he says he understands, I don’t think he does. He has never called anybody spontaneously, he has just about never asked to call anyone. After all this time, he still only uses the telephone when he is told to, to call me from his transportation and to call me when he gets home.

The Camp is closed up for the winter so the water was just turned back on in time for the picnic. Apparently something happened between the turning on of the water and the day of the picnic because when we arrived, the director was waiting for the repair man to come. There was no water. Not a big deal. There was bottled water to drink. There was also a BIG bottle of hand-sanitizer on the counter for hand washing purposes.

I had to explain all of this to DC ahead of time. I did not want him to find out when he went to wash his hands in the restroom. I am sure his reaction would have been worse if he found out on his own, but the news did not go over as smoothly as I had hoped. He just wasn’t having it. The anxiety he was already having shot up a few notches.

Something is supposed to be there and it is not – even if he doesn’t need it; it bothers him and he cannot shake it.

I took him outside so he could do whatever he had to do – flap, stim, run, yell – whatever he needed to do to calm down. He did all of “the above” and few more just for good measure but it did not seem to be helping. When he got back inside he started running to the faucets and turning them on. He went to the hand-santizer and used it – then he used it again – and again – and again. He was fixating on the hand-sanitzer because there was no water.

Finally he calmed down enough so I could leave to go for coffee with *Tonya, *Salli’s Mom.

You know… coffee without someone yelling “Mom, Mom! Excuse me, Mom!” throughout our conversation? Yeah, that.

Tonya was outside speaking with another parent, so we did not leave immediately after I left him in the Arts and Crafts building. At some point, he must have noticed that I was still outside and decided to come charging out to the driveway.

I told him that he should NEVER leave the building without telling anyone where he was going. NEVER. He should not be running out near the driveway. It is dangerous.

I understand his issues with the water and the hand-sanitizer and how he was a having a hard time getting over it (once he does get over it; he is OVER it), but this was about safety. He needs to understand that it is dangerous. He cannot make a habit of leaving places (even if he sees me outside) without notifying the people in charge and he certainly cannot go running out close to possible traffic. Yes, it was a remote driveway, but there are no gray areas with DC.

He knew I was upset and started one of his apology tours. Fearing the loss of computer privileges for the weekend, he put that aside a little bit (although I was sure I would get the full package later)  and went back inside without too much of an issue.

We finally made it to Dunkin Donuts and got our coffee.

As we were sitting there, my phone rang.

It was DC’s phone.

I panicked for a second, thinking something was wrong.

“Hello Mom. I am sorry for ‘the’ running outside”

It was bothering him and he decided to call me.

He decided to call me.

No one told him to. No one suggested it to him (trust me, I checked with the director)

He decided to call me.

It occurred to him that he could call me.

He has really only done this once before.

Once could be a fluke, but twice is – I hope – him understanding that he can use the phone if he is having a problem.

I made sure I praised him up and down about it and reiterated that he can always call me at any time – when ever he wants to.

Believe it or not, that one little phone call made me feel like he is “getting it” which of course made me feel a whole lot better.

(and I received my first dandelion bouquet of the season)

Progress. It comes in the little things, but it is there.

Doug, who has witnessed many of DC’s never-ending, in my face every 10 minutes apology tours (see: Chosing My Battles) had a good laugh halfway though. He could imagine the apology tour, me finally getting to have coffee and thinking I was getting a short reprieve from the said “apology tour”, only to have the phone ring with “I’m Sorry Mom!”.

Honestly, I was so thrilled by the spontaneous use of the phone that this did not even occur to me.

3 thoughts on “The Little Things That Aren’t So Little”