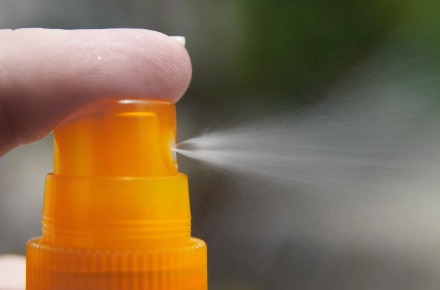 If you have been around here long enough, you know that DC dreads Sunscreen and Bug Spray season. He puts up with it some days more than others.

Come April or May each year, his job switches from indoors making dog biscuits to outdoors and the greenhouse. He loves the greenhouse, but the downside of this move is the dreaded Bug Spray and Sunscreen.

Since we have just moved into Bug Spray/Sunscreen season, I thought I would share a little story from last year. As if having to wear bug spray was not enough to throw him over the edge….. let’s just add something to make it worse.

There are more examples than I can list … this is only the most recent example.

****
Most of you know that DC works in a group supported employment program.

During the spring and summer he works in their greenhouse and also helps to take care of the grounds/lawn.

You may also know that every morning I have to load him up with bug spray and sunscreen (which he <insert sarcasm font> thoroughly enjoys <end sarcasm font>).

Adding to the sheer annoyance of having me spray this stuff all over him every morning, there is also the issue of him not really understanding how to hold his breath so he is not breathing it all in. I do try to cover his nose and mouth AND we usually go out on the porch but he just can’t seem to move out of the cloud before he takes a deep breath.

I grabbed a few of these masks the other day from work to use temporally until I had a chance to pick up some not-so-cumbersome masks somewhere else.

The day I brought them home, DC and Doug were going to walk the trail with his ARC friends.  I told Doug to be sure to put some bug spray on DC before they walked. I gave him a mask and explained what it was for.

I wondered why Doug was taking the mask with him but I saw he was also carrying the can of bug spray so I just figured he was going to put it on DC when they arrived at the trail.

When they arrived home after walking Doug reported that DC hated the mask. His glasses were fogging up and he just couldn’t stand it.

Me: (confused by this)”How long could it have taken to put bug spray on him?”
Doug:
Me: “How could his glasses fog up in that small amount of time?”
Doug: “We only made it half way down the trail before he insisted on taking it off.”
Me: “Wait! You made him walk with the mask on?”
Doug: “Yes, you said it was for his allergies!”
Me: “No….. I said it was so he didn’t breathe in all of the bug spray”
(I mean, seriously…. what he heard wasn’t even close to what I said)
Doug:
Me: So did you at least put the mask on him while you were spraying him?
Doug: No, I put it on him when we started walking.

*****
After the initial Shaking Of My Head and “Wow! How did he get that so wrong” faded away, the next realization was:

I am sure that more than one person in the ARC Group must have wondered and asked why DC was walking wearing this industrial-style, cumbersome mask. I don’t have to even ask; I can hear and see it, clear as day – Doug’s explanation:

“His mother <insert head shake and eye roll>. You know how she is.”

No matter what he tells me, I know there was some amount of eye-rolls and “over-protective mother” insinuations on his part.