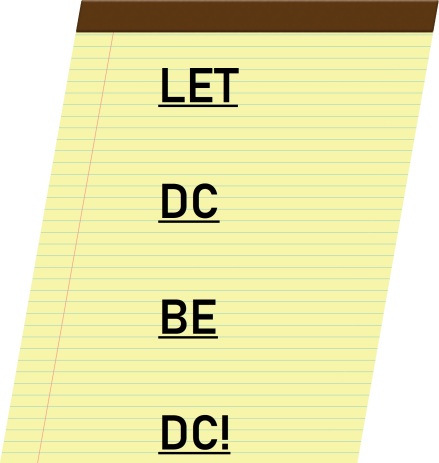 Last week, while waiting for his transport to arrive, DC decided that he wanted to wear a stick-on mustache. It was Monday and as Monday mornings have been difficult for DC lately,  I let him wear it. The mustache was keeping his mind off the rising anxiety he was experiencing, so there would be no argument from me.

Much like his precious band-aides, there always seems to be a pretty good supply of stick-on mustaches on hand. He loves them. They make him happy.

As I have mentioned before:

Back in the “Olden Days”,  we were taught that our goal was to try to normalize (the doctor’s, specialist’s and school system’s word, not mine) our children – we did not know any better. In our minds, we were trying to overcome autism and teach our children to behave the way we thought the world wanted them to behave. It took me a while and I had to figure a lot of this on my own (because…. no internet).  I had to get over the idea that had been drilled into our heads as parents, that we had to make our children behave like every other child. I had to figure out for myself and understand that he was not going to fit into anyone else’s idea of ‘normal’ and that I should not be trying to make him fit that mold. I should be making it easier for him to manage his anxiety so he would be able to navigate the world outside of our door.

I very rarely intervene in his clothing choices unless they are weather related or there is a safety issue. He works in the greenhouse during the summer months at his job/program so fleece sweat pants are not THE best idea. When he was younger, he always wore a purple cape. Because I have a thing about him wearing anything around his neck for fear of whatever it is getting stuck in something and choking him, I would only let him wear the cape around the house.

In case you might be wondering; he has only ever worn a scarf once and it was on Halloween.

That afternoon when DC made his daily call to me from the car on his way home from his program, he went “off script” and said, “I’m sorry Mom.”

Now, unless we had a rough morning or something has been on his mind all day, an apology on the phone does not necessarily mean that he is apologizing to me. Usually it means that something happened at work (or wherever he had been) but he cannot communicate it to me.

Me: What are you sorry about?

DC: Took off the mustache.

Me: Why are you sorry for taking the mustache off?

DC: Threw the mustache away. I’m sorry for mustache.

Me: Did someone tell you to take the mustache off?

DC: Threw it in the garbage.

Me: Did someone tell you to take it off?

Me: Who told you to take it off?

DC: Threw it in the garbage in the Dog Bones Room (the department where he works during the winter months)

Me: But did someone tell you that you could not wear it?

Me: Who told you that?

At this point I was beginning to get my back up because there was absolutely no reason for someone to tell him to take it off.

Me: You do not have to be sorry.

DC: Threw it in the garbage.

Me: That’s okay; we have more.

It went on like this for a while, but what I got out of the conversation was that he was told he could not wear it.

When I got home – I checked his “Talk Book”. There was a note from *Donna:

“I liked DC’s mustache but he must have thrown it in the garbage. I asked DC where it was and he said ‘garbage’. It’s too bad. I liked it” ~ *Donna

His apology to me was all about *Donna asking why he threw it in the garbage. He was apologizing to her because she asked where it went and he thought he had done something wrong by throwing it away.  At times when he wears his band-aids or a mustache, he is happy for the attention. Other times, if they are mentioned in any way, he takes them off. I think there are just days when he wears them because they make him happy and other days when he needs them as a calming mechanism and he does not want to talk about it. He might, at those times feel a little bit of embarrassment as well.

He wore a mustache again a few days later with no issue, and trust me – he needed it that day.

The points that I want to make here are:

If I did not receive the note in the book, I would not have been able to figure out what was going on. He did offer more information that he usually does, but it was not expressed in a way that gave me the true picture. Verbal and Communication are two different things. When I say (over and over again) that I worry because he cannot always tell me when something is wrong; this is what I mean. There are things that I have never been able to figure out.

You can see why his inability to communicate what is really happening worries me to no end.

The second point would be that we just need to stop looking at these quirks as something we have to fix or something to be made fun of.

If he needs a mustache, band-aids, a Christmas shirt in July, or a Halloween shirt in February – then that is what he needs.