Three years ago we left for vacation early on Christmas morning.

Two years ago was the very first time in my life I believe, that I did not have to go anywhere on Christmas Day.

Back, many years ago when I was single and working in a convalescent home, I would always volunteer to work on Christmas Day firstly because I absolutely LOVED the clients which turned out to be a big reason why I decided going to school for nursing would not be for me – I just got FAR too attached to the patients/clients.  Secondly because I could avoid the whole Christmas dinner with relatives and just show up later, after work.

Then I became a mother and still, staying home never seemed to be an option. DC had little time to “play” (I use the word, play loosely) or use his gifts before we had to leave and go somewhere for dinner.

We go to my mother’s on Christmas Eve, a tradition she started many years ago for the same reasons – too much to do on Christmas Day. He gets his Grandma fix. We have dinner. We open presents. He gets to see his “Fam-ill-lee”, which he loves. So he is not missing out on any of the regular Christmas festivities.

I believe it may have been the vacation three years ago that finally allowed us to break the Christmas Day tradition for the following year and, this year became the second Christmas that we just stayed home. DC was happy. I was happy. Doug who is not really a “holiday guy” and is really only in it for the food, was also happy.

DC had time to look at and play with all of his loot. He had time to just “chill out” (his latest phrase) and like the year before, we went out for Chinese food at night for dinner. We are lucky that there happens to be a pretty good sit-down Chinese restaurant about 5 minutes away, in the next town.

Chinese Food Is a Newer Development in DC-land: We all know that DC is a picky eater. There are only a handful of items he will eat in a restaurant. You see, eating out is supposed to be fun, so yes, he will eat a salad at home, but don’t ask him to eat one in a restaurant. He will eat vegetables at home, but vegetables are not restaurant foods, so just forget it. He will eat pasta at home (another newer development) but he is not happy about it and will NEVER eat it anywhere else – correction: he did twice but both times he was at a party and there were no other options.

His limited menu, limits our dining out choices, especially on Christmas night when almost all one can find open are Chinese restaurants.

About a year ago, we ordered takeout and the only thing that DC would eat on a Chinese food menu was the wings, so that is what he ordered. I ordered the sweet and sour shrimp. DC saw it. It was battered and fried, so he wanted to try it. I warned him that there was shrimp inside, but it was battered and fried so he was not going to pass it up.

He came back for more.

We determined that this was not just a fluke when the next time we ordered takeout he ordered the wings and again took half of my ‘Sweet Sire Shimp‘.

So now our new Christmas tradition of Chinese food is something he looks forward to and not something we have to research and figure out what we can talk him into.

There was no heat….

It was okay though….

We, along with the 3 other tables of people, ate with our coats on…

DC, in his short sleeve shirt (we just recently transitioned from his fall coat to his heavy winter coat, so the transition from short to long sleeves will have to wait a bit) did not want to wear his coat. One does not wear a coat while eating in a restaurant.

Normally I would try to avoid this argument, but IT WAS TOO COLD not to make him wear it.

He got over it when I told him he could wear it over his shoulders like a cape.

We ordered a Pu-Pu Platter, which he thought hilarious.

He ate the wings.

We had the rest.

He ordered his “Sweet Sire Shimp” 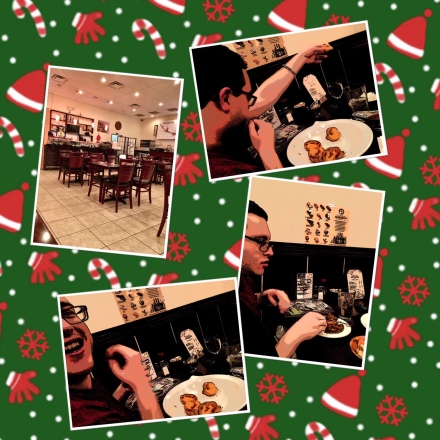 Let’s just say, normally when DC is done eating – and he eats very fast – he is done. Keeping him occupied while Doug and I finish is not always easy. He has his book, but that only lasts so long.

Believe it or not, we stayed, I am guessing close to an hour after he was finished talking to the people in the booth behind us – which is what one does in an almost completely empty restaurant. He was totally included in the conversation and seemed to be enjoying it. He never once asked to leave.

They were visiting from the warmth of Arizona and staying in a hotel so unlike us who planned to be there,  I imagine that this restaurant was one of the very few options open for them.

We had a good time and there were hugs all around when it was time to leave.

Merry Christmas and Happy New Year from DC, Me and Doug too!