December, is the time for reruns. I love reruns, especially holiday reruns. The following is a post from December 2014 about the important lesson DC and BB learned while riding the Santa Train. 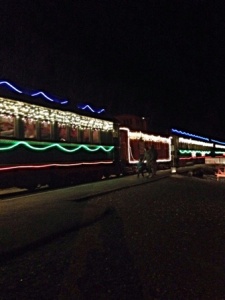 (Code word of the day: “Supplement”)

As parents, we all come to the ‘Questioning the Existence of Santa’ crossroad sooner or later. It is a sad milestone. It begins to be difficult for them to understand and believe in something that they can not see. Sure we see Santa and his helpers quite often during the months before Christmas, but never during his Christmas Eve deliveries. This causes our children to question his existence. Why can’t they see him? Why must they be asleep? As I explained to DC, Santa has a job to do. If he took the time to stop and visit with the children in every house he delivered gifts to, even with his magic, he would never be able to finish in time to get back to the North Pole to celebrate Christmas with Mrs. Claus and the elves.

It took DC many years to understand Santa. He knew he would receive gifts, but the whole idea of Santa was not something that could be understood easily. His not understanding, did not stop Santa from leaving him gifts.

When it finally clicked and he did finally get it, he was all in! Now that he does understand, he would never and will never question his existence.

The one problem was, DC ‘s Christmas requests have always been small (in size) gifts. Santa could very well bring him 20 DVD’s, but the pile of gifts (visually) would be very small. DC doesn’t understand cost/size vs. number of gifts. He expects a very big pile of gifts. So, over the years I would always “supplement” the Santa pile with gifts of my own.

Being a single mother for more than 20 years now, I am the sole “supplement-or” (yes, I know that is not a word) of DC’s gifts. Which means I not only “add” to what Santa brings just to make the pile look more exciting for DC, but I also, of course, have to buy additional gifts from ‘Mom’. This gets to be a little bit overwhelming for me, not only in cost, but in trying to come up with other gifts ideas to make that “pile” he needs to see.

Now that DC is an adult, and the items he asks for are smaller still, it is becoming harder and harder to “supplement” Santa’s  gifts, to make that Christmas gift pile”,  I did finally have to confess to him that some parents, with adult children, have to help Santa out a little bit. Santa has so many little children to deliver packages to on Christmas Eve, that it is hard for him to get to everyone. So now that the is an adult, Santa only delivers his stocking and the rest of the gifts in his pile are from Mom. Santa always did a pretty good job with his stocking, by the way. He was fine with this. As long as Santa is coming, even just to bring a stocking, all is well.

Coincidentally, the morning I read the post from Autism-Mom, was the day that DC, his best friend, BB, BB’s Dad, Doug and I were going to take a ride on the Santa train.

Earlier this week, BB had just been told by one of his other friends that he was too old and should not still believe in Santa. He was upset by this, but BB knew better. He knew he was correct in believing.

Both DC and BB were very excited about riding the train. They always have the best time when they are together anyway. 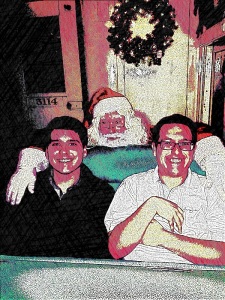 Santa boarded the train a few minutes into our trip. He received more hugs that he expected, I imagine.

BB mentioned to Santa, what his friend had said to him that week. Santa took a little bit of time to talk about it with BB and DC.

(This video below is very poor quality – it was dark on the Santa train, but you can hear some the conversation and Santa’s advice to BB)

“Those who don’t believe, well they are the one’s that are missing out” ~ Santa Claus

So there you have it, straight from Santa’s mouth. BB felt much better. He knew it before but now he really knows that he was right all along…