A few years ago, I wrote the post below because an old friend of mine emailed me a flyer she found from a Bike-A-Thon we participated in when we were just 12 or 13 years old. I was shocked when I looked at it – shocked that this was acceptable back then.  But it was and I am sure we did not think a thing about it at the time.

I wrote about it because I thought it was a good example of how far we have come regarding the use of the R-word. Not quite far enough, but we have made some headway.

My belief in how far we have come has been shaken a bit and that comes as a rude awakening…..

I am SURE that we still have so very much more work to do…..

So, take a look back to see and be proud of just how far we have come, but remember that there is still so much more work to do.

Bicycle races are coming your way…. (How the times have changed)

Long ago (long, long ago) when I was 12 or 13, my friend Sue and I participated in a Bike-A-Thon. We met up with a couple of friends Joe and Ron, who were also participating. I remember it being a lot of fun with the exception of Susan smashing into and ruining Ron’s bike gears. We had so much fun that we went around the route twice (much to the dismay of the people who pledged by the mile – I was young; this did not occur to me at the time).

For years afterwards I tried to remember what this Bike-A-Thon was for. What cause were we supporting? No one I asked could remember either. As an adult, when I think back on it, yes we had fun, but I am horrified that this organization thought it was okay for a bunch of 12 and 13 years olds to ride their bikes down these very busy main roads. It was not like it is today, roads were not closed or even sections roped off. We were on our own on these very busy main roads, most with no sidewalks or shoulders, until we came upon a check point. But this is the way it was. We didn’t think a thing about it back then.

Well, Susan was cleaning out her mother’s attic a week or two ago and found the actual map of the course we took on this Bike-A-Thon and on it was the name of the Bike-A-Thon.

Having said that, below is the map that my friend found. She was just as apprehensive about sending it to me as I am sharing it here. 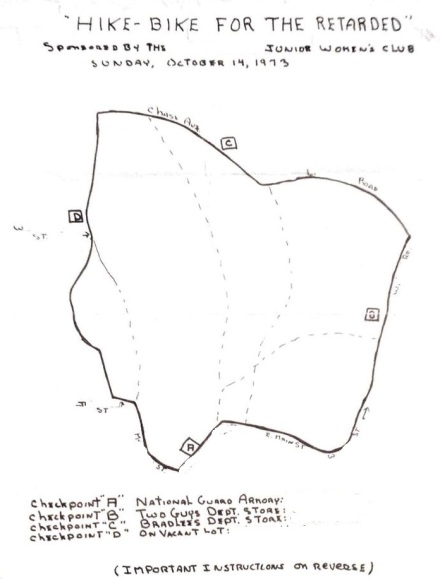 My heart skipped a few beats when I first saw it. I sat on it for a few weeks, but I thought that if you are as appalled as I was (and still am) at reading the name of the Bike-A-Thon, then let’s look at it as a glowing example of how times really have changed. It is so hard for me to believe that back then, this and a few other words I am guilty of using as a child were just okay. We didn’t know any better back then. We certainly should know better now.

I have gotten into plenty of discussions over the use of this word. Most of the discussions have been with people who really didn’t understand what the problem was as long as they were not using it to disparage someone with a special need – but they ARE! They are using it as slang for “stupid”. They are taking a word that was once used as an actual diagnosis and using it to describe “stupid”. I really do not understand why this is so hard to explain to people.