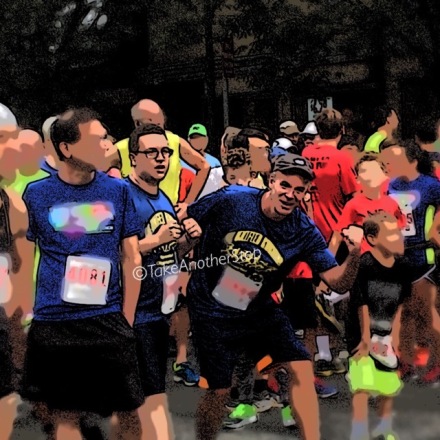 DC has participated in a variety of Special Olympics programs over the years, but never did I ever imagine he would like running. Yes, I was shocked too. We just gave it a try one year because he was tired of golf (10 years) and volleyball (4 years) because he, not really understanding the games, never advanced past the “skills” levels and that just gets boring. He swam for a good 10 years as well, but the program died off and went away. Skiing, you ask? One year and a half until I thought I’d have a heart attack and pulled him out.

Running was just something we were going to try. Because DC would rather stay home than do just about anything I always make him at least finish the season just to be sure he really doesn’t like something as opposed to him just not wanting to go out. With a few exceptions, most of the time he ends up enjoying what ever activity I have made him stick out to the end. But running? I never thought it would last. I was so wrong – he’s been running for a good six (or more) years now.

The Labor Day 5K is an event he does every year with the exception of 2015 when his seizures were brand new and me, being me was still too panicked to let him run a race. This 5k is not a Special Olympics event, it is a regular 5K attended by thousands of people as are most of the races his team participates in. The individual team members can pick and choose which races they would like to participate in. This is the race DC almost always runs.

DC is not the fastest runner but certainly far from the slowest. When he puts his mind to it he can run pretty fast, but he doesn’t really understand the competition of it all and really, that is fine with me. As at most races, there are tables set up along the route where people pass the runners water. The runners drink the water while running, but not DC. He stops and leisurely drinks his cup of water and then walks around looking for a garbage can. There are hundreds of cups on the ground because that is what you do when running a race, it is expected. Not DC! He knows that we do not throw garbage on the ground and being that there are no gray areas in DC’s mind, he is just not going to do that. Well, this year he did stop and take his time but he did throw his cup on the ground the first time Doug told him to. There was a gray area and he got past it – Progress.

There are plenty of spectators along the route cheering the runners on. DC upon hearing applause from a large group of spectators and DC being DC, stopped running, took a bow, waved and yelled “Thank-you everyone!” then continued on to the finish line…

Having to get up at 5:30 am on a holiday, I went on a hunt for coffee as soon as the race started because….coffee. I stood in the Dunkin Donuts line for quite some time. I did not realize how long until I got a text from Doug right when I finally made it to the counter telling me that they were in the home stretch. I got my coffee and headed to the finish line, but I was too late to see him come in.

He did announce “I did it!” when he saw me and also informed me that he won. I wonder if anyone told the race officials because they have him at 2426th out of 2658 runners? We’ll have to see about that.