Yesterday‘s post,  a re-posted portion of an earlier post with some additions touched on DC’s inability to keep a secret and/or the real possibly that he really does not understand the concept at all. The portion that I did not post yesterday delves into the subject a bit more.

Because I do not like to post more than once or twice a week, I was saving the second part of the original post for next week. Today is my birthday (it is official – I am OLD!) and DC, being DC just could not contain himself. The events of this morning ran right along the same lines as the post I was saving, so I am posting it today.

It is all he talked about all week. Just to be clear, he is not really excited about my birthday, he is excited about the prospect of going to dinner. Today he is getting lunch and dinner as I am going to meet him at his job for lunch and then out to dinner later – and we wonder why I can’t seem to lose any weight….seriously.

His official birthday observance activities started yesterday with a phone message, that of course he had help with (video at the end). He loves doing things like this. He loves the praise he receives and yes, he does love it when something he’s done makes me happy.

The moment Doug left yesterday, DC began telling me about the “Cards in the Drawer surprise for tomorrow – Mom’s birthday“. Apparently they had hidden birthday cards in the coffee table drawer. Then he decided to show me the “Cards in the drawer for tomorrow”  – He put them back, I suppose so he could “surprise” me with them today.

The first thing he did this morning after saying “Happy Birthday, Mom!” was to give me the surprise cards. There were two – one from DC and one from Doug. I am not sure that Doug had intended for me to have them already and I didn’t want to phone and wake him at 6am, so I opened the card that was from DC. I told him that I would wait for Doug to open the other. As I said, DC loves praise and loves to give me gifts so after I thanked him for the beautiful card and gift, he presented me with a gift my friend at work had given me the day before. (more praise, please). I am sure he will continue to present me with random items from around the house for the rest of the day as he did on Valentine’s Day after I finished opening his gift. 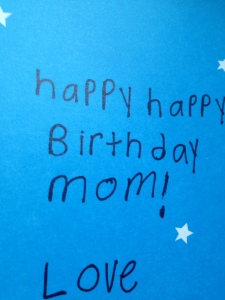 A secret or surprise is never safe with DC and he will be taking credit for any and all gifts or cards that I receive.

And tomorrow (actually, probably tonight as soon as we return from dinner when in his mind my birthday is officially over) … he will begin to obsess about our trip to New York the day before his birthday next week (with best friend “BB”) and the Winter Guard show in New Jersey ON his birthday.

Below is the secrets and surprises portion of the original post I mentioned earlier:

We were asked to write a memory for his Winter Guard Director’s Birthday. It was a surprise. I worried that he would give the surprise away before her gift was presented to her 3 weeks later.

Just what is a secret?

A secret, is DC whispering in a raspy voice louder than his already very loud voice.

A secret is pizza for breakfast.

There are times, not often, but there are times, when we have left-over pizza in the house. When there is left-over pizza, DC loves to have it for breakfast. This happens all of once every couple of months, but I know my son. If anyone were to ask him what he had for breakfast, he will answer pizza. If someone should ask him the next day, he will answer “pizza”, not because he had it again, but because 1) That is what he would have wanted to have 2) It becomes a standard answer because he is tired of answering questions 3) That was his favorite breakfast that week so that’s his answer and he is sticking with it.

What is a surprise?

A surprise pretty much runs along the same lines as a secret. If we buy a gift, and I tell him not to say anything because it is a surprise, the very first thing he will do when he sees the person that we bought the gift for is:

– Go over to that person, point at them  and says (to me) “Don’t tell anyone, surprise, shhh” and many times he will even announce just what the surprise is. I suppose because he is addressing me and not the person, he thinks he is not giving it all away.

Knowing all of this, I should have realized that the next time we went to Winter Guard practice, he would ask about Mrs. F’s birthday – by practice day it was still two weeks away. I was worried that if he mentioned it in front of her she would know that something was in the works. There would be no other reason for DC to know that her birthday was coming. I reminded him over and over and held my breath for the next two weeks. Fortunately he did not give it away, not for lack of trying though –  he did mention it a number of times at practice but luckily she was not close enough to hear it.

Historically there has never been a gift or a surprise that has not been revealed early by DC. Most of the time I opt not to even tell him, but in cases like this when he plays a part in the surprise by either choosing a gift, or writing a card or in this case, drawing a picture, it can’t be avoided.

We just got very lucky that all of his “Don’t tell anyone, surprise, shhh” (‘s) all happened out of earshot of Mrs. F.

(and just a thought…. it’s my birthday, wouldn’t someone love to come and clean my house? Just once… I don’t ask for much. Or the car…. the car could use a wash….. anybody?)

7 thoughts on “Secrets, Surprises and Pizza…………”