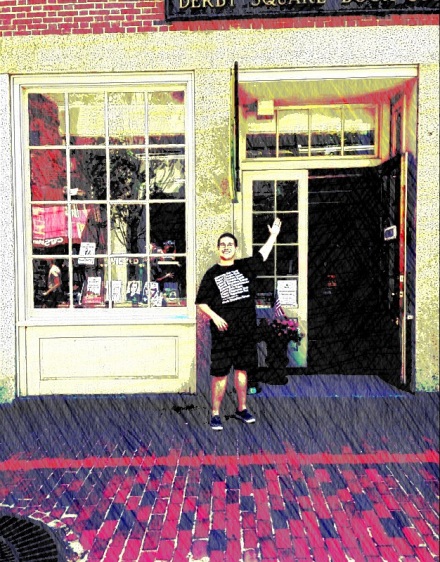 We love Salem, MA. It is one of the places, along with New York City, NY and Mystic CT, that we visit any time we have the chance. Salem has been our Halloween/October destination for many, many years. We also try to visit during the year when it is not as crowded. So we are in Salem a couple- three times a year, at the least.

DC has a “favorite book store” everywhere we visit, but the Derby Square Book Store is his all time favorite anywhere. We last visited Salem in April on Easter weekend. We were spending the weekend in Boston and decided to take a quick trip to Salem on Saturday. When we arrived at DC’s beloved bookstore, we were horrified to find that it was closed! (see: Book Store Blues)

Fortunately we found that it would not be closed forever. The new owner was outside with a table of books to sell, but no one was allowed inside because they were packing up all of the old stock. She let DC inside, thankfully and saved the day!

Earlier this month, I had the week off, DC also had the week off from his job/program so that he could attend camp. I wanted to take a trip to Salem but we didn’t have a lot of options even though we were both off because  I didn’t want him to miss a day of camp. We opted to go on Sunday.

Before I told DC that we would be visiting Salem, I had to be sure that this store had re-opened. I started searching twitter, instagram and the web for information of the re-opening. I was able to out that the store had re-opened, under the name of “Wicked Good Books” , but did not know if it was open on Sundays. I didn’t know if we should take the chance. I didn’t know what he would do if we went there a second time to find it closed. But I also did not know when we would have the next opportunity to visit.

I talked to DC and explained we may be going to Salem on Sunday. The first thing he said was “Bookstore”. I told him that yes, his book store was open again, but I wasn’t sure if it was open on Sunday.

Me: “Do you understand, DC? It might not be open on Sunday. But don’t worry, if it is not open we will go back another time.”

and another 30 seconds pass……

This went on for a while. until I thought that maybe he finally understood, but I wouldn’t really be sure until we arrived there……..

My next concern was that he was going to be upset when he saw the store was “different” (thankfully for me – now I didn’t have to worry that books were going to come toppling down on him). I began explaining this to him back in April, when we knew it was changing owners, and more-so as soon as we decided to go to Salem in July. I got the standard “Okay, Mom. I understand” reply from DC, and again, I couldn’t really know if he really did understand, but I was really hoping that he did.

We arrived in Salem and after the initial panicked run for the restroom, which only brought him closer to the bookstore (that may have been his plan all along), we headed down the street to the store and thankfully, it was open!

The funny thing was, after all of the explaining and worries, it did not seem to faze him in the least that everything was so different and that books or entire shelves were not going to fall if he took something off of the shelf the wrong way. He headed directly to the back corner where all of the children’s books were located in the old store, which turned out to be just where they were set up now and his “hunt” began.

He found 3 or 4 books that he wanted and we went to the register to pay. The owner recognized him immediately from our April visit and she commented that she was also worried that it would upset him to find so many changes. I told her that I had been explaining this to him since we left in April but I still wasn’t sure how he would react when he actually got here.

She asked him if he liked the store and he answered with an emphatic “Yes!”

I asked him if this was still his favorite book store and again he answered, loudly “Yes!”

The other girl running the register told him she liked his “Rock, Paper, Scissors, Lizard, Spock” shirt so he was in his glory all around (my boy is a big ham).

If you are ever in Salem, be sure to visit “Wicked Good Books” – It is “DC-Recommended and Approved” ….

4 thoughts on “The Bookstore Revisited…….”