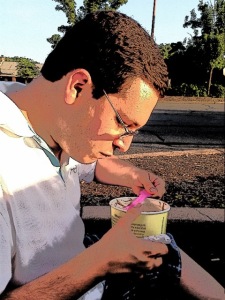 Last week DC and I went out for frozen yogurt. Normally DC gets the “Bucket Size” with as many toppings as he can fit, hot fudge and whipped cream. I usually get the smaller size, no toppings and I throw mine on the scale quickly to see how much it weighs so I can track my points. I have to admit that most of the flavors all taste the same to me, but a treat is a treat especially if it works with point-tracking.

Earlier that day, I had French fries with lunch so I decided that my day was already blown – I might as well just go all out (yes, I can throw in the towel that easily – don’t judge).

DC likes his toppings but doesn’t understand that he can’t just keep heaping them on – they end up all over the counter. I taught him to put some on the bottom before he gets his yogurt, so that is what he does now. I took my own advice and put a layer of Butterfinger crumbs on the bottom of my “ bucket”  before picking out my yogurt flavor. We paid for our yogurt, complete with toppings, fudge and whipped cream and took a seat.

Half way through DC announced “This is mine”.

I didn’t know what that was all about but I said “Yes, Bud, that is yours”.

He announced again, “This is mine!”

Now I’m thinking that he was worried that I wanted some of his. (You know the commercial for macaroni and cheese “skimming”? That’s me! Guilty! He usually never comments on my skimming, so I was a little surprised that he was so adamant about the yogurt being “his”).

We continued to eat our yogurt and when DC made it to the bottom of “his”, he showed me his spoon covered with MY BUTTERFINGER Crumbs and said “I don’t like this” (seriously, WHO doesn’t love Butterfinger crumbs!)

We had mixed up our yogurt buckets and he knew it. He was trying to tell me that the whole time. Now I know he confuses the words –  I, me, you, yours and mine but he was so adamant about telling me it was “his” and because of my assumption that the “skimming” was beginning to bother him  I just didn’t realize he was just reversing his words as usual!

So the lesson for that day was;

If I listened to what he was really trying to say, I would have gotten to have my Butterfinger crumbs!