Knowing full well what I was in for, I took away DC’s computer privileges on Sunday evening for reasons that are not necessary for this story.

He is only allowed to use his computer on the weekends. This rule stemmed from the original rule of watching his DVD’s on weekends only. As he now uses his computer to watch his DVD’s,  the rule was amended to include his laptop. He has an iPad and is allowed to use it daily, which he does. I have not had to make a weekend rule about iPad use… yet. I did, however have to put limits on it.

What is the difference, you might wonder? Watching his DVD’s becomes an obsession to the point where he does not want to do anything else. While on the computer he can have the same scene playing on DVD, Netflix and on YouTube on three different screens and alternate rewinding that scene between the 3 screens. It is rewind heaven! Because he cannot use his DVD’s with it, he has not reached that level of movie watching…err rewinding in multiple windows on the iPad.

Losing his computer on Sunday night meant he would not have the opportunity to use it again until Friday, IF the behavior did not continue.

And so it began…

“Mom, I promise never to do it again. I’m sorry! Computer on Friday?”

(Repeat, with some variation 122 times)

I explained that we would have to see what happens during the week before I tell him he could have it back on Friday.

“Mom! I was a good sleeper. Computer on Friday?

Finally, and with a great deal of apprehension because it was Monday and Monday’s have not been DC’s favorite day, by any means , I told him that we were not going to talk about this any more and if he kept asking, he would certainly not get his computer back on Friday.

With that, DC went upstairs and I waited for the fallout.

Instead, he seemed to take that time to think about it because I heard him reciting a line from one of his Disney shows; “If you live in my house, you have to follow my rules”. This also made me believe that he was actually understanding that he did not follow the rules and I was not just a “Mean Mom”.

It seemed as if we had turned a corner.

I did not hear about it again the rest of the morning.

When he called me in the afternoon to tell me that his transport had arrived and he was “going home nowwww”, there was no mention of “Computer Friday”.
Wow! He got over this one rather quickly.

He called me again when he arrived home as always. Usually this call as well as the earlier call are scripted; he rarely goes off script – he tells me he is home and tells me what he and his aide are planning to do.

Me: We’ll see what happens this week.

“Computer on Friday” continued after I got home from work.

Now really what I should have done was taken his computer away on Sunday for the original infraction and if the behavior continued, take it away again for Friday, because we all know that “Maybe” is not a word and “We’ll see”, if it means anything to him, probably leans more towards a “yes” than a “no”. But I was all in now, so I could not back down and change my mind.
(Please understand that even if I had told him at the beginning that he could have his computer back on Friday, all of this would still be happening as he would feel the need to verify that fact; over and over again.)

After answering the same question more than once and reminding him that we were not talking about this now, he decided to change his strategy…

“Mom, Going to Dad’s on Friday and use Dad’s computer?”

Me: No. when you lose your computer privileges, you lose them everywhere.

In my infinite wisdom I thought that if I gave him a specific date and put it on the calendar, I might get a break from the continuous questions.
I marked Thursday on the calendar and told him that I would let him know about “Computer Friday” on Thursday.

“Mom! Come here!” (calling me to the calendar and pointing)

“Thursday to use computer on Friday!”

“Mom will tell me on Thursday. Use computer on Friday.”

“Mom! I am a good <insert eater, sleeper, dresser …..> Thursday to use computer on Friday.”

You knew that was coming……. 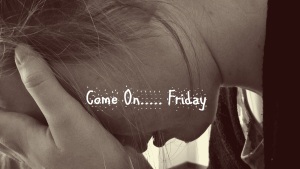