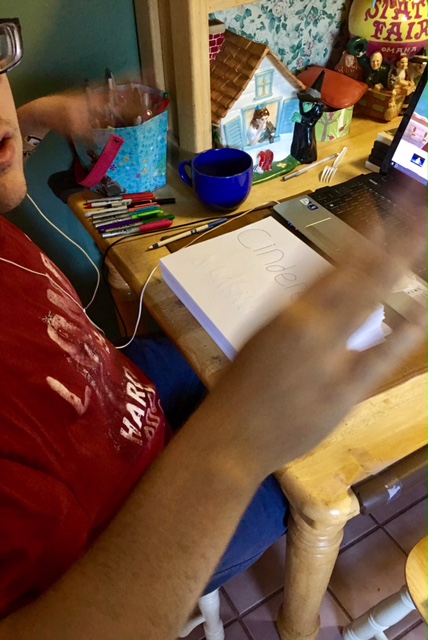 Back in the “Olden Days”, stimming was actually something that we (parents and the school system) worked hard to stop. We were trying to normalize (their word, not mine) our children – we did not know any better. In our minds, we were trying to overcome autism and teach our children to behave the way we thought the world wanted them to behave. It took me a while and I had to figure it out on my own (because…. no internet) that stimming was actually helpful to him. I had to get over the idea that had been drilled into our heads as parents, that we had to make our children behave like every other child. I had to figure out for myself and understand that he was not going to fit into anyone else’s idea of ‘normal’ and that I should not be trying to make him fit that mold. I should be making it easier for him to manage his anxiety so he would be able to navigate the world outside of our door.

The idea that stimming was something to be frowned upon was so drilled into my head that even to this day, if I am not paying attention and just reacting, I still find myself, on occasion, telling him to stop.  If he gets loud, I will take him away from others to give him the chance to stim as  much as he needs to and as often as he needs to. Who cares if he is rocking in the car or flapping in public? If it helps him to calm himself and not totally lose control, I’ll take the flapping, jumping or whatever he needs to do to calm himself.

Imagine having to live with that much built up anxiety all day everyday and having people try to program you into bottling it all up with no relief or outlet.

I am in no way saying that stimming cures meltdowns, but way back then, when I did come to the realization that DC needed to stim and the stimming was helpful in “letting it all out”, his meltdowns did lessen.

His stimming and anxiety have increased over the last year or so and I do have to manage it so that others do not get smacked with the random flying hand. If it is bad enough I will take him outside. The problem now is that he is more aware of it and does not want to do it, he just cannot control himself. Taking him outside seems to put a spotlight on it for him. He does not want to be removed and he is not always ready when he asks to go back in. But there are times when he just cannot manage without hitting someone (accidentally) or breaking something (accidentally) so we have to find a space where he can stim without hurting himself or someone else. If we can get away with stimming without having to remove him, then I will let him be where he is because quite honestly, it takes him longer to get over it when he is removed. There is the added anger that he has been removed from the situation. At 26, we are still in search of that middle ground.

Back in the “Olden Days”, eye contact was one of the major things we were told that we had to fix. It was as if his intelligence was being judged and based on the amount of eye contact he was able to make. As I said in the two earlier posts, we were in very unknown territory and only had doctors and teachers to rely on, so we took what they said as gospel.

Add eye contact to the list of things that we eventually had to figure out for ourselves.

Eye contact is not the indicator of intelligence or an indication of a person’s attention. I learned that DC could and was paying attention and he did not have to make eye contact to do so. Forcing eye contact only served to make him focus on ‘Making Eye Contact’ and not on anything I was saying or teaching.

DC spins. He loves anything that spins. He watches you-tube videos of things spinning. Princesses spinning are his favorite. Back in the “Olden Days”, spinning was taboo – not allowed. Spinning things, I suppose was a form of stimming and stimming was not supposed to happen. The only other reason I can think of that we did not allow our children to spin things was the distraction to every thing else it caused. I do feel badly that so much effort was put into making him stop. But we knew what we knew and that was not much.

Now, I see these spinning toys that are all of the rage and I just have to laugh..

How times have changed (for the better), but really, had I known back then that we would be encouraging spinning…… oh, the money I could have made.

(This post was originally part of the last installment of Autism in the Old Days, but to shorten it up, I saved stimming, spinning and eye contact portions for this post)