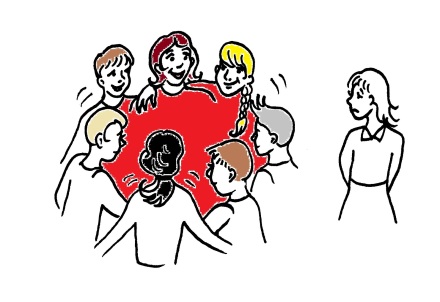 I have read and shared a couple of pieces just this week (here and here) about a subject that many people just do not seem to understand.

Our Kids Are People.

One might think that this would be something that should not have to be explained, but believe it or not, it is. Praising your child for spending time with or eating lunch with the SPED student or someone who is viewed as different is in reality, teaching your child that our kids are not people and that treating them as you would treat anybody else is cause for celebration.

*The TSA agent who decided that because DC is autistic, there was no reason to speak to him or treat him like a human being. He just grabbed him and patted him down. The mere mention of autism led the agent to believe that DC did not have to be treated as a “person”.

People do at times overlook him completely and direct their questions to me instead of talking to him. I do always ask him the question myself and make sure he gives the person the answer himself. I mentioned earlier in the post that I thought that there was no way on earth that the security guards did not understand even before I explained that DC has autism.  Now as I think about it, I wonder if they actually did understand and decided that due to his autism, they did not really need to talk to DC directly at all…… and THAT is a problem.

*The “Volunteer” that we will talk about in the post below.

*The people who refuse to even respond to DC when he attempts to socialize. It happens quite often.

These people have decided that DC has a disability and therefore does not deserve to be treated as a human being – he doesn’t know any better. Well, he does know. He can and does get his feeling hurt.

Along these same lines… if you or your child are going to volunteer for some sport or activity, please be sure you/they are doing it for the right reasons and remember that our kids are people too.

Originally Posted in April 2018 on the other blog:

Attention Awareness, you missed a spot

While on our way to one of DC’s events, I asked Doug how the dance went the night before. He said that it went well. Then he began telling me that one of the college’s sports teams had to do some community service hours – I thought he was going to say that they volunteered at the dance….

So…….. having dinner with one of our kids is now considered community service???

I wonder if there will be a video?

After hearing the volunteer/dance story in the car, we arrived at DC’s event.

DC is a participant in a few sports teams. As with most of the teams he participates in, each participant is assigned a “Buddy” who carries their equipment, directs them to what they are supposed to be doing and where they are going and helps them out during the game.

DC has a buddy who does not acknowledge him at all. She doesn’t say hello, she really does not even look at him. I thought maybe she was just shy at first, but she has no problem talking to her two friends (who are also ignoring their participants for the entire time we are there).

DC knows he is supposed to stay with his buddy, so he got a little bit nervous when she and her two friends walked through the halls on the way to the gym in the front of the line and DC was way in the back (they are supposed to walk with their buddies). Later in the “holding area” where they were waiting for their turn, she stood with her two friends, back to DC who just stood there alone – the entire time. Twice I had to go and move DC over because she had his equipment over her shoulder and I was sure she was going to hit him in the face with it each time she moved. I thought maybe she would get the hint, but she did not. She never even acknowledged he was there.
This is not the first game where I noticed this and Doug (who notices nothing – his words not mine) actually brought it up to me more than once.

When it was finally their turn to play, they went out to the gym (no, she did not walk with DC), had their turn and then…….. she just walked out of the gym leaving DC standing there in the middle of the gym by himself. Fortunately I was close enough to get to him before he ended up in the middle of the crowd at the doors, where if he got that far, I would still be looking for him now.
She did not even turn around to see where he was – she just left.

I did report it via email to the coach (after we left the building because I just did not trust myself to be civil to this girl and just wanted to leave the area).

A shy person would say hello. A shy person might maybe look in his general direction once in a while. A shy person would at least acknowledge his existence. She does none of those things…. not one. If you were there to see this, you would understand that this is NOT just a case of her wanting to spend time with her friends.

She treats him as if he does not exist, as if he is not a person.

You have to wonder what motivates her to even volunteer with this team.

Common courtesy would motivate a person to at the very least,  say hello. Apparently some people do not see our children as real people. This is a problem.

4 thoughts on “Our Kids Are People.”