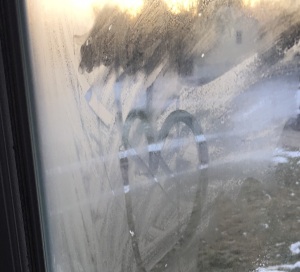 Yesterday while standing in front of the door waiting for DC’s transportation to come, I decided to draw a few hearts on the fogged up window. DC loves to draw on windows when they are all ‘froggy’ (DC-speak), so I asked him to draw a heart for me. He did, and in true DC fashion he started with a V and continued around in one stroke to make the heart, instead of drawing one side and then the other. I still find it amazing the way he sees something as simple as a heart. It still comes out the same way, but he sees the drawing of it quite differently than I do. It always makes me wish for that 5 minutes in his head to see, through his eyes the way he sees the rest of the world around him.

The heart reminded me of an earlier post about this very subject (and ummmmm…. full disclosure – the hula hoop is collecting dust in the same spot I left it back then).

Perception, Hula Hoops and a little bit of Firefly…. 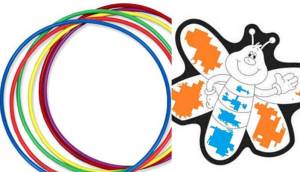 Last week I was talking to my friend Geri at work and somehow we got on the subject of hula hoops. I proceeded to tell her that I was quite the expert hula hoop-er when I was a kid. I could hula hoop 4 at a time, I could do all of the tricks. I could start at my wrist and hula hoop to my neck, waist, hips to my knees and all the way back up again. I could walk down the street while hula hooping. I was pretty good, if I do say so myself.

Later, back at my desk, Dud Gramley rang my extension to tell me that he had been in Target that past weekend and he noticed that they had a few Firefly characters on the shelf, “You know, that guy that you like with the Hawaiian shirt”.

“That would be Wash”

“Why is he holding a dinosaur?”

After only watching for 20 minutes a year ago (he insists it was more), Dud has determined that he HATES Firefly. With every ridiculous reason he gives me, it becomes only another reason for me to make it my mission to get him to watch it.

I told him I had planned to stop at Target on my way home anyway so I would check it out.

I brought them home and DC was not impressed at all. I tried mine out and much like anything that is different to him – as my first pair of glasses that he insisted that I “Take off glasses, NO!” or anytime I happen to put my hair up “Mom! Hair! No!” – he did not like it at all. He kept grabbing it to make me stop. I finally got him to stop grabbing it and hula hooped for about 15 minutes. It was exhausting, because, you now – I’m old, but it was also kind of fun. It was so exhausting that I wondered if this could actually be a workout – I googled it and yes, there are quite a few hula-hoop workout videos on you-tube. So I’ve found my new workout routine. We’ll see how long this lasts.

This story (I really am going somewhere with all of this) is really about DC’s perception of things, many things. The way he sees things and how difficult it is for him to process what he is seeing at times.  I can never take for granted that what he sees and how he processes what he sees is same way I see it.

His elementary school O.T. pointed this out to me. For example, when DC saw and wrote the letter X, he did not see it as two diagonal lines intersecting

– he saw it and wrote it as two V’s (or arrows) connecting.

For years when he went swimming, he would walk around the pool stroking with his arms. He thought he was swimming because looking at it from outside or above the water, he thought that was exactly what everyone else was doing.

So after I completed my 15 minutes of continuous hula hooping the other day, DC decided to jump on the band wagon. He ran into the living room with his hula hoop and yelled “Hey watch this” and proceeded to spin the hoop. But instead of the hip action it takes to keep the hoop going, he spun himself around. Of course the hoop fell, but this did not stop him, he thinks he is doing it correctly.

“Hey, watch this” again and again.

8 thoughts on “‘Froggy’ Windows, Hearts and The Way He Looks at Things….”