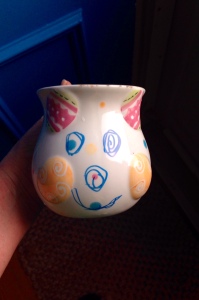 There once was a pretty little Easter Cup.

This cup went unnoticed for many years until one day when DC decided that all this cup needed was a face. This cup with its new face was to be named “Chip”. Chip, of course being the chipped cup and son to the tea-pot, Mrs. Potts in Beauty and the Beast. Every day Chip’s face washed off in the sink and every day DC drew it back on.

He used this cup every single day.

Last year around Christmas time I thought how great would it be if I could find him a real Chip Cup. My first stop, as always was Amazon and there is was. It was quite expensive for a cup, but in comparison to DC’s usual requests for items that don’t exist or items that I have to find on EBay (usually a collectables), costing a fortune – was a deal.

I read the description and the reviews to be sure that this was something that was intended to be used as a cup and not just decorative and purchased it.

He was so excited to open the gift and find this cup on Christmas morning. He loved it and like the old Easter/Chip cup, used it every day.

One day in August not too long after DC had his second seizure, I was washing his Chip cup and happened to notice it said “Made in China” on the bottom.

Me, being me panicked.

Me, being me completely went over the top with my panic.

I bought this from Amazon. What if the person selling this cup had it in stock or sitting around for years? What if the cup contained lead paint – because, of course everything that goes wrong HAS to be completely my fault. Yes, I know that this is highly unlikely and yes I know that they would not allow a seller to sell this item with lead paint, but..

me, being me threw his beloved Chip cup away right there and then.

This did not go over very well…… at all.

It took a few months, but I thought he had finally gotten over the loss of his Chip cup. Then December came and it was time to make his Christmas list and there it was……

He had not forgotten….

Not really thinking I would find another until possibly the next time we were actually in Disney World, I went to the Disney Store site and there it was. Once again, I read the description and the reviews to be sure that it was not for decoration only and purchased it – directly from Disney; no third sellers involved. I felt much more at ease about that.

He was ecstatic and has not let it out of his sight since. 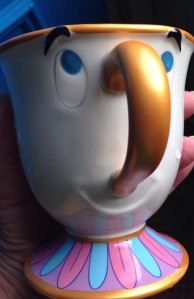 And the poor lonely Easter cup has been relegated to the back of “Cup-board” (DC-speak) never to be drawn on again….

If the cup was not of such a decorative nature, I would not thought anything about the “made in China” label. Most of our other cups were made in China.