As I wrote in an earlier post (There’s no elf on our shelf), I do not do the whole elf on a shelf thing with DC, but last year we did start a new tradition of hiding and hunting for the numerous ornaments he receives each year before Christmas.
Last year being the trial run, I discovered he was just not noticing them as I assumed he would, so I began writing notes each time I hid an ornament. By Christmas he was getting the hang of it. This year I decided I would not only leave a note, but also a clue. Coming up with clues that he would understand was not easy and I have to admit my clues need work – below is our 2014 Ornament Hunt –
Complete with some pretty terrible clues – so don’t judge.

#1 Elsa hidden on the shelf of his DVD cabinet 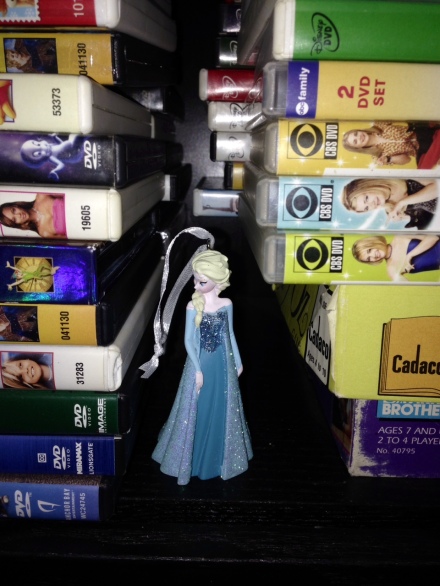 There is a new ornament for you to find.. I hid it very well. If you should find it after you watch your movies, please give me a yell”

~That was the last attempt in rhyming for the season.

#2 Mary Poppins in the silverware drawer.

There is a new ornament to be found: Just a SPOONFUL of Sugar helps the Medicine go down. What do you use to help the medicine go down?”

#3 Baloo and Mogli on the towel hook 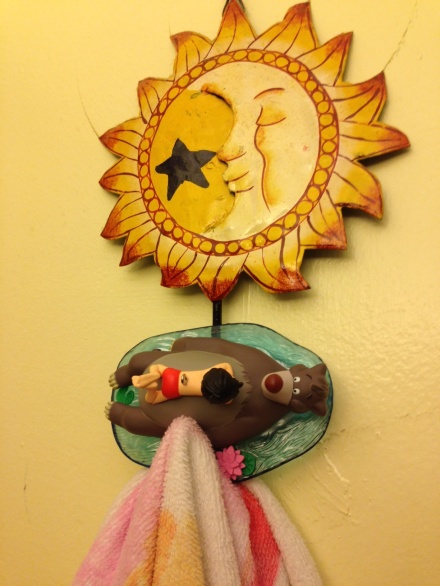 He found Baloo and Mogli before I had the chance to leave a clue….

#4 Tinkerbell in the drawer 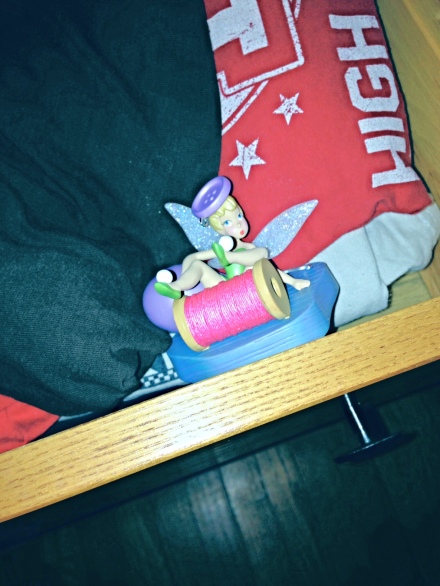 Oh No! Tink is stuck in the bedroom drawer!”

Yes, I thought I was just giving this one away. I thought so anyway…. As it turns out, because I didn’t mention an ornament in the note – he read it, put the paper down and went about his business. When I finished laughing, I explained that he had to look for his new Tinkerbell ornament.

#5 Sully hanging on the lamp 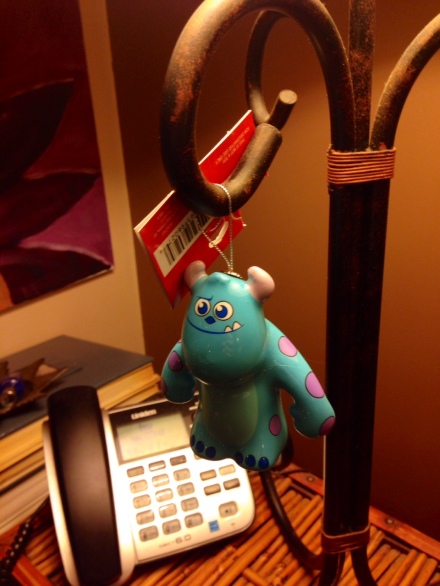 Sully must be very “BRIGHT” to attend Monsters University. Where is it Bright in the living room?”

It was right here that it finally clicked. He read it (no mention of an ornament) thought about it and without me having to help, looked around at the Christmas tree lights, moved on to the lamps and found it.

#6 Ruby Slippers on his bedroom shelf

Cordelia clicked her heels three times in Pylea “There’s no place like home” she said.

Who went to Pylea to save Cordelia?”

He understood the question and gave me an answer – he was really beginning to get this. The only prompting I had to give was “Do we have Angel and Lorne somewhere in our house?”

(Unfortunately, our Lorne lost his head after his last fall from the shelf, but in keeping with the theme of the hunt; he did actually lose his head temporarily while the gang was in Pylea. He just had much better luck getting it back in Pylea than he did in DC’s room)

so take a look around to find Buddy the Elf sitting on a shelf.

Where is the L O S T shelf in the living room?”

First, let me say – There is an elf on the shelf.

Secondly, I thought this clue might be a stretch for him. That DVD set has been on this same shelf since the show went off the air. This in no way means that DC notices it at all, but I gave it a shot.

Believe it or not, he went right to it. I am always amazed by the things he notices when I think he is paying no attention at all.

#8 Brady Bunch on the wall

Till the one day when the lady met this fellow And they knew it was much more than a hunch, That this group must somehow form a family. That’s the way we all became the Brady ‘Bump’.

Where does Doug do the ‘Brady BUMP’?”

This one needs a little it of an explanation….. Doug sings this song, he’s done it for years. He sings the Brady Bunch theme but replaces Brady Bunch with Brady Bump and crashes into the wall.

DC thinks it is the funniest thing in the world and asks him ‘crash and repeat’ – over and over again.

This happens to be the spot where the singing and the wall where the crashing takes place more often than not.

-insert,  as DC would say, “Mom, put hand to face” (hand on forehead, as in OMG), shaking head, heavy sigh and eye roll-

Again he went right to the spot. Once it all clicked, it clicked!

#9 TARDIS on the clock 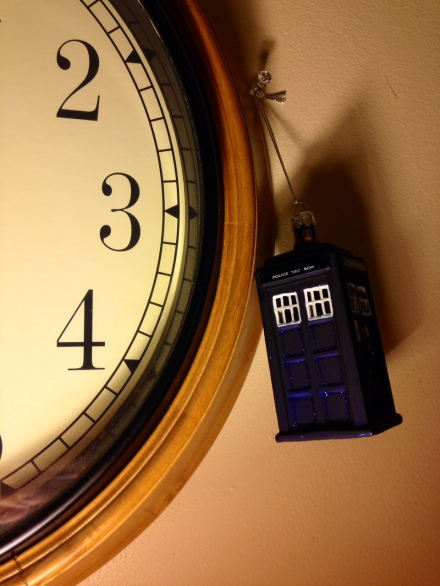 Dr. Who is a T I M E Lord. – He and the TARDIS traveled through T I M E hoping for a spot on your tree.

I am 100% positive he would have gotten this with the clue I left. I hid this ornament while he was out with Mrs. H. at his theater volunteer Christmas Party and forgotten about it by the time they arrived home, when I would have guided him to the clue before he had the chance to run around putting his things away.

He spotted it and went over to take it down. I said “Oh, you didn’t get to read the clue”, so of course, he put it back. I told him he didn’t have to put it back, but all things in order; he went and read the clue out loud, then went back to claim his ornament.

#10 Princess Merida in the TARDIS 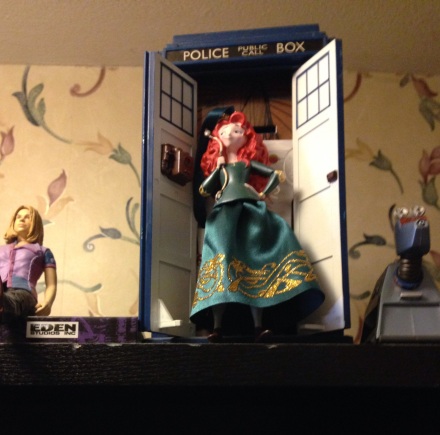 Princess Merida must be very BRAVE to take a ride with DR. WHO, ROSE and K-9 in the TARDIS.

Where is ROSE and the TARDIS?”

I realized that I did not think this one through completely – He just received a TARDIS ornament a few days before. I was sure he would head straight to the ornament now hanging on the tree. I was correct in my assumption, he went to the tree. After a little bit of prompting “But where else do we have the TARDIS? Where is Rose and K-9?” , he did find it.

I still felt he should still have a few to just happen upon as he did or as I tried to have him do last year, hidden in places that I knew he would go eventually.

Mickey and Minnie in the snack bin

The Chipmunks Record Player on his CD player

Tiana in the vegetable bin

Sleeping Beauty on the headboard

Just to update you on my friends’ progress this year. As I said, if I am not going to do it, they very well better be creative about their elf!

Year 2 of  “The harassment of *Al” – my constant badgering to hide elf in a Rice Krispies box. (I’d seen photos, I e-mailed, texted and showed him photos and nothing). Finally he decided he would use this as one of his Elf setups. Geez!

I told him that I had just seen a photo of someone using a Crispie Rice box, I had actually e-mailed it to him a few days before, but he said it would not be the same.

The following morning when I was getting DC’s breakfast ready it occurred to me that I had a box of the ‘real’ Rice Krispies, so I took the cereal out and brought him the empty box. 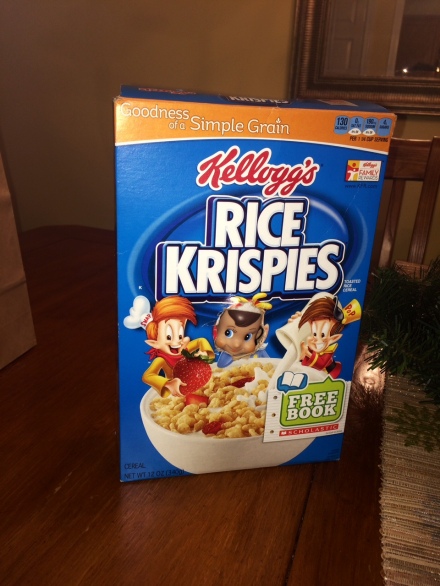 And there you have it!

*Geri has also done a few very creative things with Derek the Elf, but still being in the training portion of the program, she has not gotten the hang of remembering to take a photo of everything Derek gets himself into.