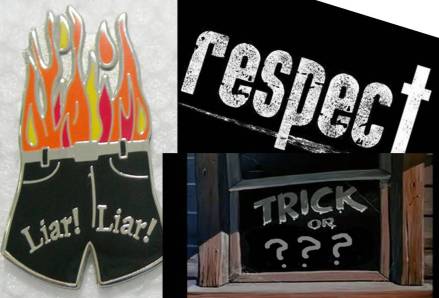 We have heard a lot about RESPECT, AWARENESS and UNDERSTANDING over the past few weeks (End the r-word) and we will hear quite a bit more next month during Autism Awareness Month.

There are times when, we, as parents of children or adults with special needs, do have to go to extremes or try many different tactics to get information from our children. Communication is not easy with my son. He can/will tell me what he wants but anything else is difficult. An answer to a simple question, if I can get an answer at all, can take a good long time and a lot of work.

Having said that, when I drop DC off at an activity or event, I do have to tell him verbally and in sign that I am going for ‘coffee’. For some reason, and I really have not been able to figure out why, he knows this means and I am coming back to pick him up. I consider this a “little white lie” , not a big deal. 90% of the time, coffee will be involved in whatever I am doing or wherever I am going.
If I tell him I am going home, or to the store, my departure is prolonged by :
“Mom is coming back?”
Yes, DC.
“Mom is never coming back”
Of course I am coming back, DC.
As I start to walk out of the door, he moves on to – “Mom, come here please”
…………………….and the whole process begins again.
For some reason he accepts ‘going to get coffee’ and it is all good.
For the record, in case anyone thinks he’s been traumatized at some point by being left somewhere……. I have never forgotten to pick him up, I have never even been late to pick him up from anything at anytime, so I really don’t know where this comes from, but ‘coffee’ seems to be okay with him. Why I have to use the ‘coffee’ sign is just another mystery.
This sort of thing, which actually makes him feel better, and is not hurting him or anyone else, is fine with me. I don’t really consider it a lie and it is certainly not a trick.

A few weeks ago, a friend and I were having lunch in a restaurant that is staffed by special needs adults. They do, of course have supervisors, but the wait staff and kitchen staff are all adults with various special needs.
This particular day, my friend and I were sitting at the farthest corner of the restaurant.
I am a “people watcher” by nature, but if the following exchange could be heard in detail by us, sitting so far away, it was without a doubt, heard by the customers sitting closer to the front.

I noticed a staff member approach the restaurant supervisor, who had been eating at her desk since we arrived, with some sort of candy/food wrapper. I really didn’t hear what the first staff member said to the supervisor, but the supervisor replied, “I don’t know who was just in the bathroom”. So again, being a parent of a special needs child and having quite a few friends with special needs children, I surmised from this (loud) statement  that someone was sneaking food in the bathroom.
I get this, I get how this could be a concern. Did it have to be announced? No, but I do get it.
I continued to watch because, still eating with one hand, she picked up the wrapper in a scissor hold (between her index and middle finger), lifted it up into the air over her head and turned it side to side as if she was looking for finger prints or something. The production she was making was kind of funny and way over the top. It was without a doubt entertaining, anyway. I assumed that was the end of it, but what followed was not funny or entertaining at all.

She put her food down, got up from her desk and went over to the counter that looks into the kitchen area. She raised this wrapper over her head (still in the scissor hold) and asked, “Who left this wrapper out here” (Not “Who left this wrapper in the bathroom”).
I could hear a few employees answer, “Not Me”, “It wasn’t me”.
She then said, “I just wanted to know where I can get these”. Her assistant joined in by saying “They look so good, they have raisins and ___,  (I couldn’t hear the other ingredient she mentioned) we just want to know where we can get them”.

At this point I could hear someone reply. I could not hear what they said, but someone did reply.
The supervisor then asked “Did you buy them yourself or did your mother buy them for you?”
I heard the employee reply that her mother bought them.

As they walked away from the counter, proud of themselves for tricking the employee into confessing by taking full advantage of her disability, the Assistant said, “I knew it was her” – the Supervisor replied, “Of course it was, she didn’t say a word when I asked who left it”.

Again – far side of the restaurant – we heard all of it.

RESPECT, UNDERSTANDING, AWARENESS, TRUST and let us add CONFIDENTIALITY???? What do we do when the people entrusted to care for and work with our children do not seem to know the meaning of any of those words?

Apparently, we still have so much more work to do.

(Just as an FYI, Normally I would have said something to her, her supervisor or both right away, but I was 95% sure that the person they were tricking into confessing was the son of a friend of mine. I wanted to tell my friend the story before giving the manager a heads-up and a chance to come up with a different version.)

Tales from the Day Program – ALL