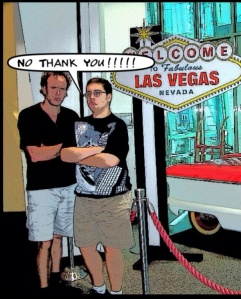 Full House…. One of DC’s favorite TV shows. He especially enjoys Stephanie’s classic line; “How Rude!” It must be the delivery because DC really doesn’t have any notion of “rude” or what it means. He says what he says, the way it makes sense to him. He has no concept of what rudeness is.

Years ago, in the grocery store he wanted to get past someone, he just said, “Move”. I explained to him that this was rude and that he should say “excuse me”. And he did……. to every single person we passed in the store, every single one of them. He now knows not to tell anyone to “move” because I told him not to. He doesn’t understand why and just knows that it’s rude, not really knowing what “rude” means and not really being able to relate it to other things he does that can be seen as rude. It’s rude because Mom said so, period.

A few years ago, we were in Las Vegas. We were walking down the street and I was holding DC’s arm trying to navigate him through the hordes of people made worse by construction, on the sidewalks. He also has no awareness of what’s around him, in the sense for example, he will stand up in a restaurant to put his coat without looking around to see if he’s going to hit a waitress or a customer with his arms. He just doesn’t have the thought process to consider who might be around, who might be in the way, who he might knock over. He just does what he has to do. I was so preoccupied with making sure he wasn’t in anyone’s way, bumping into them or hitting anyone when the arms started flapping, that I didn’t notice the people out on the sidewalks handing out their “marketing materials”. I looked down and DC had a handful of business cards, all with photos of women on them. He wasn’t looking at them, he was taking them because they were handing them to him, and we always do what we are told. I took them and tossed them in the trash. I couldn’t just tell him not to take them. He wouldn’t know what to do when the next person tried to give him something, and that would result in a bit of a breakdown. Mom said not to, but they are still giving these to me. That sort of conflict in this head is never pretty. So I told him that if anyone else tries to hand him anything else, that he should be polite and just say “No, Thank you” and not take it.

In Vegas, the people handing out “literature” stand about 7 or 8 in a row and you run into another 7 or 8 of them every 10 feet. So DC, following the rules, proceeded to walk down the street, screaming “NO THANK YOU!” at each and every one of them, all the way down the street, the entire time we were there, anywhere we went.

That’s my boy! He IS NOT rude 🙂 I did manage to get him to lower his voice a bit as the days went on and he was very proud of himself for being so polite – even though he really doesn’t understand what that means either. It’s all still a work in progress………………….