In case a refresher is needed (or if you don’t read the other blog), DC is officially on overload with his Christmas Calendar of Events.

I worry (it has happened) because sometimes he gets himself so worked up and excited for something that by the time we reach that date, he doesn’t want anything to do with it anymore.

~ Christmas, The Schedule and “Fam-a-LEEE”

When we left you, he was heading to his Auntie Kim’s house for Christmas with his Dad’s “Fam-a-LEEE”.

Over the next few days, three items on his “Remind Mom about Everything 176 Times a Day” list would be checked off.

He returned from Auntie Kim’s happy with some gifts. Fearing that DC’s gift would not arrive in time for her get-together, she had it shipped to our house. DC understood that and the gift arrived the following day.

(DC knows the theme song because I, having a bucket-load of useless information stored in my head, remembered it as soon as DC first discovered the show and sang it at him incessantly. I was surprised however to only hear music and not the song as he was watching season one. I discovered that they did not add lyrics until later seasons. It did not stop me from singing it over and over again)

The day after “Auntie Kim’s” we went to “Straw Bridge” with his friend BB and his parents. It was rather cold and windy but we all had a good time.

We took the route backwards (as we were told to do that last time we were there, to get to Santa before the line got out of hand), so our first stop was Santa.

After Santa we found Mrs. Claus (I’ll have to ask for her anti-aging secrets)

There was a bonfire and later the tree lighting… 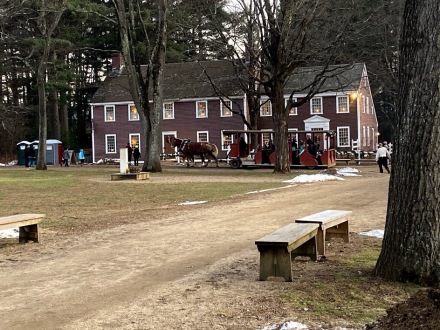 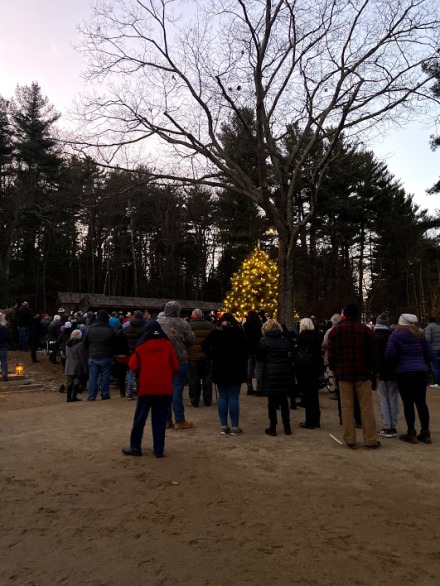 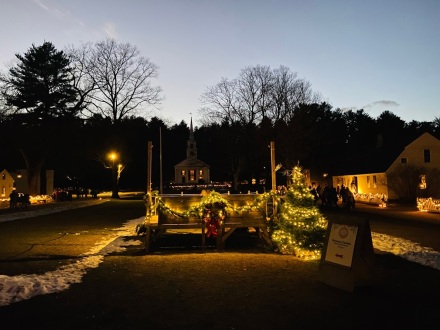 We met up with The Ghost of Christmas Present and DC was still curious about whether his beard was itchy. 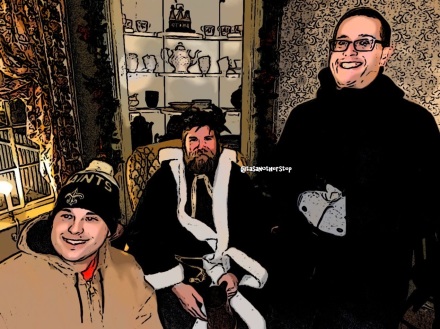 Monday came and so did the Camp Christmas Party…

“The events that I need endless “reminding” about are slowly moving into the “completed” column.
DC and *Salli at the Camp Christmas Party”

With Friday came the Work Party…

DC is ready for his work party. Originally this was on the list of things he was “so excited” about. It was on the “every five minute reminder to Mom” list….. until he found out that they were going to be serving pasta (he is NOT a fan). I haven’t heard one peep about it since. I did convince him that where there is pasta there is normally bread (he is a BIG fan) and surely desert, so he is a little bit more in the spirit.
(It is only over the last few years that he will eat pasta but he is still really not a fan)
#NoPastaPlease#JustBread

But…. there would be no bread.

No bread? With pasta and meatballs? No bread?!?!?

Santa made an appearance, though and DC asked him for…

17 Markers (Sharpies, to be exact)

On Christmas Eve, Eve (DC gets a kick out of that) he announced:

Mom, I’m going to shave for “the place” (the restaurant on Christmas Eve)
He started shaving for Christmas Eve over a week ago. It keeps coming back.
(Time is complicated for him but this is also another way of making Christmas Eve part of the conversation).

Happy Holidays to all of you and here’s hoping that Santa does not forget those 17 markers!

(Oh! He received Toy Story 4 in the mail from a friend in California. Needless to say, he was thrilled but he also went and crossed Toy Story 4 off his list for Santa (the back up list on the refrigerator) immediately.

If you are having trouble following our December posts because I keep bouncing from one blog to another, here they all are in something close to “in order” :

Christmas, The Schedule and ‘Fam-a-LEE’

Still Counting The Days Until Christmas

The two above  cover the same time period in different ways

And So It Was Christmas

In case you are new here: “I tell stories, most of the time; single individual stories about this or that. Some may be written with humor and some may come across as “Oh, look at the cute thing DC did or said” (he does crack me up at times) but my object is always to make people understand how his mind works, never to “make fun of him”

It is difficult to explain “his” autism to anyone without resorting to 1000 examples and 1000 stories. So I tell 1000 stories to make clear that there are other sides to autism than the characters seen in TV or movies.”