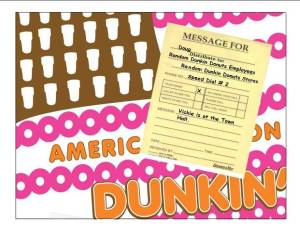 To whom it may concern – Lost a Dunkin Donuts

(To lighten the mood a just a little bit.)

Many of my stories are about my son, DC and his autism. I suppose this is one of them, in a round-about kind of way. Ten years later, this series of mishaps still makes me shake my head and laugh.

DC does not like to have “baby-sitters”. He is good with the people he had after school and now that he is finished with school, the people he has after work.  He is fine with that because they are here when he gets home and I am not; I am still at work. If I am home and then leave him with someone; that is a whole different ball game. He doesn’t tolerate it well, at all.

Add that to that the fact that he will not go to sleep until I get home. He is alright for a few hours but after awhile he will begin asking/ repeating “Mom is coming home soon”. There is nothing anyone can say to make him stop asking/repeating that phrase.

(File that, bit of information for later)

Doug is always the last to embrace any sort of technology. In 2003 (or 2004), he did not own a cell phone. But, in his defense, that was still a time when not everyone owned cell phones. We were still required to actually KNOW other people’s phone numbers.

Doug had my cell phone number programmed into his landline – “Speed Dial #2” – my home phone was “Speed Dial #1”.

(File this bit of information for later as well)

That particular year a group of parents got together and decided to make an attempt to pressure the Town Park and Recreation Department to develop Adaptive Recreation Programs for our special needs children. There were really no programs available at that time and we believed that it was only fair to have programs available to our kids just as they were available to all of the other children in town.

This project required quite a lot of time, parent meetings, petitions, and meetings with Boards, Commissions and the Town Council. It did not help our cause that this was a particularly hostile budget year; a proposed Zero budget increase year.

On the night of the Town Council meeting when they were to approve or not approve the proposed budget, Doug came over to stay with DC, so I could attend the meeting along with the other parents in the group.

I told him it would probably run very late since, as I said earlier, this was a very volatile budget year.

(“Very late” – another point to file for later)

I told him he could try to get DC to go to bed, but if he couldn’t he should just let him “relax” on the couch and with any luck, he might just doze off.

The meeting was long… very long. I checked my cell often to be sure there were no problems at home. I even went out into the lobby to call home around 9:30 and told him again that it was going to be late.

When it got to be about 11:00pm, I started to worry that if DC was still awake, and chances are, he was; he was really going to be driving Doug crazy asking for me. It was also a school night and I didn’t want him to be up that late.

One friend, knowing how obsessive I am about weight and my backside, said jokingly “If you get up now, your a## will be on live TV” as the council meetings are televised live (file that too!). So I stayed. After another 15 minutes, another friend and I decided we would risk it and got up and left together.

So now I’m home, and they are out looking for me! Doug had no cell phone, remember, so I couldn’t even call to say I was home.

It was another 15 or 20 minutes before they came back. DC is now upset because not only was I not home, but Doug dragged him out at 11:15 to look for me as if I was lost.

I asked why he didn’t just call me  if he was so worried or if DC was driving him that crazy.

BECAUSE HE DIDN’T KNOW MY CELL NUMBER AND HE COULD NOT HIT “SPEED DIAL #2”!

He then told me that they were searching the Dunkin Donuts hoping to find me there.  When he didn’t find me at the Dunkin Donuts’ in town, and the one in the next town over, he decided to look for me at my friend Donna’s house, because he assumed we were there  “gabbing”. Luckily they stopped back at my house first before barging into Donna’s house at 11:45PM.

“Who would ever think that a meeting would go on that long?! You people must be crazy to sit at a meeting that long!” (I said VERY LATE, I did, TWICE!) – If we go back to our “filed information” we remember that the meetings are TELEVISED –LIVE and he only needed to turn on the TV to see it was still in progress.

To add insult to injury, he wrote the note on THE BACK OF DC’s HOMEWORK!

So now, I am trying to get DC to bed and desperately trying to erase the note on the back of the homework page and seriously considering “loosing” his homework just so his teacher wouldn’t have the impression that I was out gallivanting (yes, gallivanting, I’m old) to the point that they had to go out looking for me.

So what did I take away from this series of events, you might ask?

–          I should leave messages at random Dunkin Donuts in the event people may think I am missing.

–           Trying to erase crazed notes written on the back of my son’s homework is futile. –  Fortunately I had a parent/teacher conference the

following week and his teacher got a kick out of the story. And… yes… she did see the note.

And regarding “Speed Dial #2”

– Never pass up the opportunity to say “I told you so”

*The Adaptive Program budget was approved

3 thoughts on “A Series of Ridiculous Events”