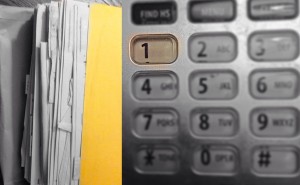 and Contact Numbers that rarely bring one to an actual person…. “Please press One”

or “Please complete this form. A form that you or no one you know will ever be able to understand – we do not even understand the form and can not help you in any way,  but we do expect you to be able to complete it by…..”

Not a fan of the paperwork. (click here for a fun romp through our state’s system)

Not a fan of the mountains of unnecessary mail that comes my way.

This (4 page) letter is to inform you that you have been assigned a new contact – Effective immediately, your new contact is: Customer Service at 555-5555.

Is it really necessary to send a 4 page notice at a cost of close to $2.00 in postage to both DC and myself to inform us that our new contact is “Customer Service”? Especially since the last 4 times we were notified of a new case manager their name just happened to be “Customer Service” as well.

I have developed a real aversion to opening my mail – ask anyone that has ever seen my kitchen table. Fortunately it is only DC and I that have to use the kitchen table , so there is still room enough for us, for now.

I have been a single mother for about 22 years so all of this paperwork has always fallen to me. In my opinion, the paperwork got worse and more confusing after DC turned 18. At this point, I am used to it and it is more annoying than anything else. Why do we have to do the whole probate thing every three years? Is it to make certain that DC still has autism? Two redeterminations every year, a social security report once a year and an audit anytime they feel like it. Reporting his wages every month – which really is not a big deal in the grand scheme of things – but sitting though that automated system can drive one to want to ‘slam head on table’. There is an app for this now and when it is working, is much easier. When it is not working we have to resort to the ‘slam head on table’ automated system. After using the app or the ‘SHOT’ system, I receive 2 letters, one for me and another for DC, thanking me for reporting his wages and an estimate of his upcoming benefits. Later in the month I receive two more with the actual amount of his benefits. Four letters every month at more than 1.00 in postage each. It seems like such a waste of money and resources to me, but what do I know?

DC’s father’s only contribution since DC turned 18 is health insurance. He retired from the police force before the pending contract took effect when they would have had to begin to contribute for dependent coverage,  so as it stands DC is covered at no charge.

What would normally happen here is:

But….. I had just finished DC’s redetermination (a good 10 pages) and completed another redetermination over the phone at 7:00 am on a Saturday morning (yes, they called at 7am on a Saturday because they were “working overtime” which, I assume must mean that if they are up and working everyone else should be), so after reading one paragraph, I decided I was just not going to read it at all. I would just give it to his Dad.

From the paragraph I did read I gathered that this was about DC’s ER visit after his first seizure in June. I also surmised that they were not willing to pay the amount that the ER doctor had charged for the visit.

I gave him the letter the next time he arrived to pick up DC. He looked confused – just staring at the pages. I did tell him that I was boycotting paperwork that was not mine but did explain to him what I thought it was all about…. reasonable and customary etc.

So off he went straight on into his first foray through the world of paperwork, forms and 1-800 numbers.

The following week he came back so beside himself at the amount of time he had spent calling numbers that provided no information at all. He was convinced that they were just sending him ’round in circles.

but at how perplexed he was over all of this. Until then he did not realize just how much nonsense I and others have to go through just to have a question answered – just to talk to a person. And this was just the insurance, not any of the agencies that we all have to deal with.

He said that he did actually get to speak to one person who gave him yet another number to call that turned out to be some sort of factory in Minnesota.

He was done at this point (and yes, I was still laughing, not at him – well maybe a little – but at his reaction to the whole thing – it was all new to him).

He left me with a stamped self addressed envelope (because he was leaving for Florida for the winter the following day) to send him any bill that I might receive so he can just pay it. He was so beside himself that he was willing to just give up and pay whatever they wanted in order to never have to call them again.

That may have been their plan all along…

and welcome to my world…..