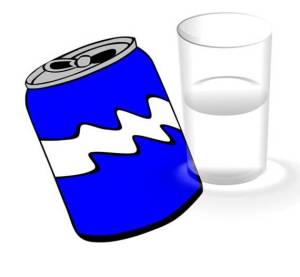 We never have soda at home. I don’t buy it unless I am having people over. I do buy sparkling water for myself, but not soda. Even though I do not buy soda, DC seems to drink more soda than the average person. We do go out to eat often and I usually do let him get soda in the restaurant. The problem; they seem to just grab his glass and refill it so quickly that before I even realize, he has had 3 large glasses of soda in one sitting – he drinks it that fast. Add that to the parties, picnics and other events or activities where soda is always available…….. and he has been drinking far too much soda.

As you may or may not know, DC had a seizure over a month ago.  It took a ridiculous amount of time, in my opinion to get his EEG scheduled and more of a ridiculous amount of time waiting for the results. While doing all of this waiting for the tests and the results of said tests, I had convinced myself that the severe heat on that day was partially, if not entirely the cause of this seizure.

Well the results are in. CAT Scan – Clear (we did already know that from the ER), Blood work – Clear, EEG – Clear. I am told that all this means is that there was no seizure activity at the time of the EEG, which of course does not mean he will not have another, but it also does not mean he will have another……. Ba Dum Bump…. I believe I am now in the exact place I was when all of this started. Don’t you just love that?

Moving forward and armed with this wealth of information <sarcasm>, I am still of the mind, that this seizure was due to the heat combined with the stress of the rest of the day. I have stressed to everyone concerned how important it is to keep him hydrated, especially because he works outside and in a greenhouse. He has never been a big water drinker. I do give him water all of the time but unless he drinks it standing right in front of me, I never know if he’s actually drinking it or drinking enough.

I had already put the kibosh on soda when he has hot lunch at work a while back and I am happy to say that he has been following that rule. He is ordering it AND actually drinking it. Ordering coke has become habit to him when we are out so I really thought this transition would be difficult and I really wasn’t sure he would follow through when I wasn’t with him.

I have noticed that the last few times when he has been out with me, he has ordered water instead of soda without hesitation and without looking to me to remind him first.

A few weeks back when I went to pick him and his friend up from a camp activity where I know they have soda with their dinner,  the program director and the other staff  told me that they were all shocked that DC insisted on having water with his dinner!

If nothing else, I have successfully eliminated soda from his diet and so much more easily than I ever imagined.  Now if this would only work for his cheeseburger (another item I do not buy for home) obsession, we would be golden……